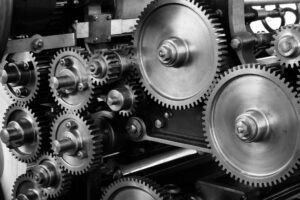 The Simogear servo geared motors available through Siemens suppliers YB Components are well known for their versatility, demonstrated by the wide range of geared motor variants that Siemens manufacture for their Simogear product catalogue.

Simogear servomotors are equipped with precise and efficient planetary gearboxes that make them suitable for many different types of applications. They boast smooth running operation and compactness in motion control applications, and come with a number of mounting options.

In this article, we will focus on the excellent Simogear servo geared motors with planetary gearboxes.

There is a pre-mounted gearbox solution in the form of the SIMOTICS S-1FK2 servo planetary geared motor which facilitates the highest number of cycles. There are light gearbox versions that have a low moment of inertia, or inertia that has been adapted to move heavy loads with precision.

The large amount of gearbox ratios and sizes make the Simogear servomotor gearboxes very adaptable to the various applications they can be used for. Thermal dimensioning is simple for these Simogear servo geared motors and you can also expect optimum adaptation of the torque-speed ratio as well as the mass moment of inertia ratio between the motor and the load. They come pre-mounted, fully tested and ready to go.

There are three main versions of the SIMOTICS S-1FK2 Simogear servomotor, so let’s closer at each of them.

A pre-loaded tapered roller bearing gives the SIMOTICS S-1FK2 with NLC gearbox a high degree of stiffness which makes it ideal for high radial and axial loads. The IP65 sealing system provides plenty of protection against dust and water.

The rated output torques are 1.51 and 240 Nm, with 3-100 gearbox transmission ratios. There are both 1-stage and 2-stage versions, while the torsional backlash is rated at 7-10 arcmin.

The large output bearing makes the SIMOTICS S-1FK2 with NRK gearbox ideally suited to applications with higher radial and axial forces. These gearboxes are also excellent for higher speed applications due to the low internal friction they produce. Their sealing system is IP64.

The rated output torques are 2.25 and 450 Nm, with a gearbox transmission ratio of 3-100, with both 1-stage and 2-stage versions available. The torsional backlash is rated at 8-20 arcmin.

The NRB is the lightest gearbox of the range and features the highest power density. It has a low friction bearing design which makes it suitable for high speeds as it only produces a low temperature rise. The sealing system for this model is IP64.

The rated output torques are 2.2 and 650 Nm, with a gearbox transmission ratio of 3-320. The SIMOTICS S-1FK2 with NRB gearbox also features an extra gearbox stage, with 1-stage, 2-stage and also 3-stage available. The torsional backlash is rated at 6-22 arcmin.

If you require any Simogear servo geared motors, then contact YB Components who are the UK’s leading Siemens suppliers in Yorkshire. We keep local stocks of all such parts and more ready to ship out fast and free all over the UK and the rest of the world.