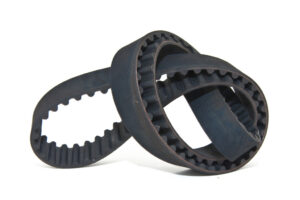 The energy efficient Carlisle Air-Cooled Heat Exchanger (ACHE) belt has a unique Z-shape design which serves as the air-cooling heat exchanger.  The ACHE belt drives also have a vertical shaft to give them an upward lateral movement which greatly reduces wear and tear.

The Cotton Drive Carlisle variable speed belts are made to replace OEM belts on cotton gin drives. They are one-inch pitch timing belts that have been specially designed for use in harsh conditions. The tensile members of these belts have been constructed with Ultra-Cord that gives them extra dimensional stability compared with other belts.

The Dual Synchronous Carlisle variable speed belts feature a double-sided design which gives them a 100% load capacity on both sides. They are very flexible and efficient using an advanced polymer construction made with extra strength fibreglass cords.

The high performing Carlisle Panther belt is very resistant to wear and tear and is able to produce a high torque capacity thanks to the non-aramid fibre used in the construction of its tensile members. There is also an XT version of the Panther belt which produces a quiet but efficient operational performance. Built to be resistant to oil and high temperatures, the XT Panther belt also boasts high thermal stability thanks to the carbon fibre cord in its tensile members.

There are also two versions of the Synchro-Cog Carlisle variable speed belts, including the HT belt and the Timing belt. The former is known for its smooth and quiet power transmission thanks to the precise and accurate spacing of the teeth. The treated fibreglass cords in the tensile members also create excellent stability and strength. The Timing version of the Synchro-Cog belt has trapezoidal teeth made with an advanced polymer that makes the moulded teeth very sheer resistant.

The Gold Ribbon Cog-Belt by Carlisle is another high performing heavy duty variable speed belt constructed with a durable synthetic rubber called Ethylene Propylene Diene Monomer. As well as being very durable in demanding conditions, the Gold Ribbon Cog-Belt is static conductive and very heat resistant, even within a wide range of temperatures such as -45 degrees Celsius up to 121 degrees Celsius