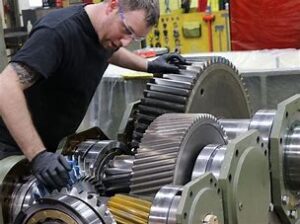 There are a lot of similar sounding terms when it comes to gearboxes and geared motors, especially when you add gear reducers into the mix as well. Here we will give a quick breakdown of these similar terms and what they actually mean.

A geared-motor unit can adjust the speed of a motor or maintain a particular speed for operational purposes while generating torque. The geared motor unit has the ability to generate high torque even at low speeds thanks to the gear-head which acts as a torque multiplier so that a relatively small motor can produce high speeds.

A geared-motor unit differs from a gear reducer, though they are often presumed to be the same thing. All geared motor units generally consist of a gear reducer (also called a speed reducer) as well as a motor which together can reduce and control the speed while generating maximum torque.

Geared-motor units will generally be classified according to the motor they are fitted with with, which include the likes of worm gears, planetary gears, spurs, bevel, helical and bevel helical. Different motors have different advantages for different applications, but whenever they are fitted into one unit along with a gear or speed reducer then the whole thing is called a geared motor.

A gear reducer is a mechanical component that has a singular purpose: to reduce the revolutions per minute (rpm) being transmitted from a motor to the machinery it is driving. It is part of a geared motor unit (and a gearbox, but we’ll get to this catch-all term below), but not the entire geared motor unit itself as a gear reducer does not have its own motor.

Gear reducers have the purpose of reducing the speed generated by the motor, controlling it while simultaneously helping to increase the torque being generated by the motor. Think of the gear reducer as the motor’s assistant helping it maximise its workload. By helping the motor maximise the torque by controlling the speed, the whole geared motor unit can produce the maximum amount of power for the machine it is driving.

Gearbox is a pretty generic term that can apply to any equipment consisting of gears that connect a driving motor to a driven machine.

If you require gearboxes and geared motors, then contact YB Components who are the UK’s leading gearboxes suppliers who can ship out fast and free all over the UK and the rest of the world.