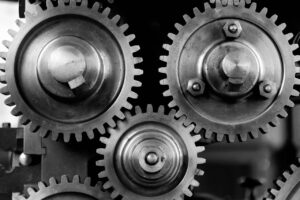 Every kind of gear type has its own pros and cons that make it suitable for certain applications and not others. To know what gear you need for a particular machine, you should have a grasp of the basic gear types.

Here we break down the pros and cons of three basic gear types.

The gears of worm gearboxes are primarily used for right-angle applications. They are self-locking which means they don’t need an additional motor brake in a lot of the applications they are used for. This means they are less expensive than a lot of other gears. Another pro of worm gears is that they operate quietly and fairly smoothly, especially when they run in just one direction.

One negative factor is that the efficiency of a worm gear will usually fall within 60% and 80%, far below the 97% of the helical gear described below. They are also prone to energy-wasting sliding friction that can cause overheating and wear down the gear teeth faster. Worm gear applications where the motor moves in more than one direction also experience more and more backlash over time as the gear teeth wear down.

The aforementioned heat that worm gearboxes tend to produce has forced manufacturers to innovate a number of ways to minimise it. Design tweaks include adding a special ‘breather’ valve to allow air in and out of the gearbox to equalise the pressure. These breather valves introduce a new problem though as they can allow contaminants and moisture into the worm gearboxes.

Spur gears are another less expensive option available through gearboxes suppliers, certainly compared to the next gear described below, as they are easier to machine than helical gear designs. They can be more expensive than worm gears, but also have some advantages over worm gearboxes. The main advantage is that spur gears are more energy efficient because the teeth create a rolling friction instead of a sliding friction as with the worm gears. This means overheating is not often an issue.

The most efficient gear type is the one found in a helical gearbox. Yorkshire’s YB Components supply plenty of this design as they are popular for applications that require the high efficiency. The helical gearbox design generates rolling-gear interactions and always has multiple teeth engaged during operation, which produces relatively high torque but with little noise.

The fact that they are not self-locking is the one big con to using a helical gearbox. Yorkshire’s gearboxes suppliers YB Components can advise you which motor brake to add to hold the axle in place.

If you require a helical gearbox in Yorkshire or anywhere in the UK or around the world, or want to learn more about worm gearboxes, then contact YB Components who are the UK’s leading gearboxes suppliers.