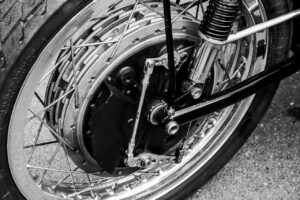 The Rotafrix friction rings and friction wheels developed and manufactured by ContiTech Vibration Control have been designed for use in rolling-contact transmissions, and are particularly suitable for the drum drives of conveyor systems.

Both can be used separately but there are some significant differences to be aware of.

You can buy Rotafrix products here.

The difference between the Rotofrix friction wheels and the Rotafrix friction rings is that the rings are fitted to the wheel body instead of being permanently vulcanized to the rim like the wheels are.

Previously, conveyor machine operators had to find their own wheel bodies, sometimes even needing to make their own. Engineers at ContiTech Vibration Control developed the Rotafrix wheels and rings to serve as a package solution.

The Head of Sales at ContiTech Vibration Control, Frank Dahmen, said of the Rotafrix products: “The friction ring and friction body are perfectly matched, allowing optimal interaction. By providing this service, we are simplifying the fitting of new systems and offering cost-effective package solutions for retrofitting.”

As stated, the Rotafrix wheels and rings from ContiTech are ideally suited for use with drum drives or drum motors.

Drum drives are basically motorised pulleys, for which there are also Rotafrix guide pulleys available through Rotafrix suppliers YB Components. The motorised pulley works like a geared motor unit enclosed inside a metal casing usually made of steel. The drum drive acts as the conveyor belt’s driving pulley but in just one single component.

The first recorded drum drives were originally conceived back in 1928, though they were not designed for use with a conveyor system until the 1950s. The design was inspired by the goal of creating a compact and completely enclosed motor unit consisting of just one single component.

It was designed to be very efficient by generating lower frictional losses than the geared motor units existing during those times. It would also improve both the hygiene and safety of the applications it was used with.

Modern day drum drive applications can be found all over the place. You see them at work in supermarket checkouts and at the airport security check-ins. They are frequently employed in food processing conveyors, and the roller shutter doors of garages work because of a reversible drum drive.

Other alternative drum motor designs include some that have had incremental encoders integrated into the rotor bearings. This creates a closed loop control system which enables the operator to track and position the load being transported along the conveyor belt. Another design sees back stop and non-reversing bearings fitted to stop inclined belts from rolling back. Reversible inclined conveyors can also be fitted with electro-magnetic brakes that enable quick stopping.

If you require any of the ContiTech Rotafrix rings or wheels for use in rolling-contact transmissions such as drum drives, then contact YB Components who are the UK’s leading ContiTech and Rotafrix suppliers.