Written by [google_authorship] on 13th September 2019 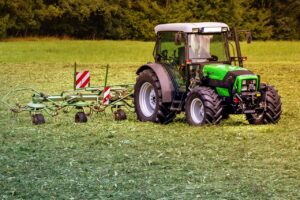 Tractors are especially useful for agricultural work thanks to their powerful diesel engines and extra large chunky tires which enable them to travel easily over different terrains. They are as comfortable on slushy mud as they are on smooth asphalt and boast the kind of power that even the fastest sports cars can only dream of. However, a tractor’s power isn’t designed to make the vehicle go fast, but instead to pull huge and heavy loads behind it as well as to power certain implements attached to the back.

A hay baler is a good example of tractor doing both a pulling and powering action at the same time, as the tractor pulls the baler along while also powering the machinery inside the baler.

The powerful engine and huge tractor tyres are not the only parts of a tractor that enable it to pull such heavy loads. A tractor’s gearbox is also specially designed to convert the high-speed revolutions of the powerful diesel engine into significantly slower revolutions of the large wheels. This conversion massively increases the force the tractor can create to haul things along behind it.

Of course this conversion of power into strength instead of speed means tractors do not move very fast. They can obviously move a lot quicker when not pulling any loads, but they are still a bit slow, as drivers of ordinary cars on country roads will testify to, no doubt with a roll of the eyes.

Tractors feature a number of important components aside from the powerful engine, huge tyres and special gearbox.

The hydraulic hitch is a powered pulling and lifting system at the back of the tractor which allows the tractor to lower the likes of a plough onto a field where it is working, but then lift it up again in order to move to another field.

The drawbar is what tractors use to pull along heavy loads such as the aforementioned ploughs and hay balers, as well as manure spreaders and other agricultural machinery. Drawbars are basically strong rods which act as a secure but flexible connection between the tractor and the load, enabling the tractor to turn corners while hauling something large and heavy behind it.

If you run a farm or operate machines such as tractors, then you will occasionally need an agricultural motors supplier. Yorkshire-based YB Components keep local stocks of many agricultural machinery parts and can ship them locally on the same day they are ordered. The parts can also be shipped quickly all over the UK for free as well as all around the world.

If you need an agricultural motors supplier in Yorkshire or anywhere around the UK and the rest of the world, then contact YB Components who are the UK’s leading agricultural machinery parts suppliers.