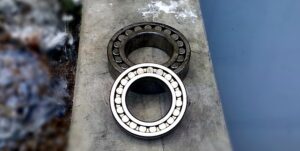 There are many excellent ball bearing products designed by the best manufacturers of industrial parts in the world, and YB Components have spent years sourcing the highest quality and most reliable examples and keep local stocks in order to ship them out quickly when they are needed.

As a ball bearings supplier in Yorkshire, delivery of such parts is possible on the same day of ordering for companies based nearby in areas such as Castleford, Bradford, Leeds, Wakefield, Pontefract and Knottingley. Shipment of all industrial machinery parts is also fast and reliable all over the UK and the rest of the world.

The modern designs supplied by YB Components were not the only form that bearings have existed in, and it’s interesting to see exactly how far back their usage goes. Many scholars believe that the invention of a rolling bearing might actually predate the invention of the wheel. Here’s a brief history of bearings…

The Ancient Egyptians are often credited with using roller bearings, often made out of tree trunks that act as rollers under sledges carrying an object. Such usage of this basic bearing technology has been depicted in Ancient Egyptian art, notably in the tomb of Djehutihotep, who was a provincial ruler around 1900 BC. His tomb contains a schematic drawing of the transportation scene of a colossal statue of himself being transported on a sledge using water as lubrication.

Egyptologists had originally thought the pouring of the water was simply a ritual, but engineers have since confirmed the transportation technique as feasible. It is understood that the water served to increase the stiffness of the sand in order to reduce the force needed to move the statue.

The Age of Italian Engineering Genius

The earliest known physical example of a rolling bearing was recovered from the remains of a shipwreck at the bottom of Lake Nemi in the Lazio region near Rome in Italy, believed to have sunk around 40 BC. It consists of a wooden ball bearing supporting a rotating table.

Italy is also home to one of the most famous examples of historical bearings in the form of Leonardo da Vinci’s drawings of a helicopter-type craft from around the year 1500. Without a doubt, da Vinci’s designs are the first recorded use of bearings in any kind of aerospace design.

Another Italian of the same era is also responsible for publishing the first ever sketches of roller and thrust bearings. Agostino Ramelli was a brilliant engineer who wrote and illustrated the engineering design book ‘Le Diverse et Artificiose Machine del Capitano Agostino Ramelli’ (or ‘The Various and Ingenious Machines of Captain Agostino Ramelli’).

Another interesting historical footnote in the journey of ball bearings to their modern day incarnation is the 17th century innovation that solved the problem of ball and roller bearings rubbing against each other and causing additional friction. The solution was to enclose the balls or rollers within a cage, a design believed to be have been originally described by Galileo, the renowned astronomer, physicist and engineer.

The first modern ball bearings patent belonged to British inventor and ironmaster Philip Vaughan around the end of the 18th century. His design featured a ball running along a groove in an axle assembly.