Written by [google_authorship] on 14th December 2018 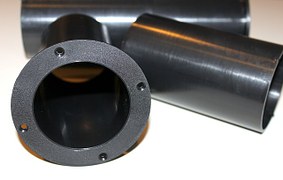 Desch are a German manufacturer specialising in the design of industrial clutches and couplings. Here we focus on three of their excellent coupling designs in the form of the flexible Habix and Hadeflex couplings, as well as the sturdier Orpex coupling.

Desch’s Habix coupling is a flexible jaw coupling that enables a versatile connection of two shafts that can handle multiple torque power variants. The two halves do not require a particularly high accuracy of shaft alignment to be connected and thus they are easy to install and maintain. The machined Habix couplings also boast excellent precision as their primary operating characteristic, as well as being distortion-free and displaying an impressive durability. Operational safety is also guaranteed with these Desch couplings, with the distortion-free characteristic retained up to the breaking load of the cast iron jaws.

The flexible elements of the Habix couplings have also been specifically designed to compensate for angular movements between the two connected coupling parts, either in radial or axial directions. This flexibility in operation is maintained even when the torque power fluctuates. An additional characteristic of the Habix flexible coupling is that it can handle permanent thermal loads of up to 80 degrees Celsius, with minimum operational temperatures as low as minus-20 degrees Celsius.

Desch’s Hadeflex couplings are claw couplings that also include flexible elements so that they can create a torsionally versatile connection between two shafts. The flexible elements of these Desch couplings cancel out rotary vibrations and absorb impacts, also effectively dampening the noise output. Also any angular movements, whether radial or axial, between the coupling’s two connecting parts is neutralized by this special flexibility.

As is the case with other flexible Desch Couplings, these Hadeflex shaft connectors offer great resistance to oil and atmospheric conditions, as well as having a long lifespan that is not reduced by general wear and tear. The temperature resistance of these Desch flexible couplings also ranges between minus-20 and 80 degrees Celsius.

The plug-in design of the Hadeflex couplings makes them especially easy to install. The ISO balancing quality grade of these couplings is G16, so they can be used with any application that requires a reliable shaft connection betwixt motor and machine.

The Orpex coupling design guarantees completely reliable torque transmission. With a robust build, the tough Orpex couplings are primarily used in heavy duty applications. Being another plug-in coupling, Desch’s Orpex coupling is easy to install and will maintain a reliable accuracy during operation. The coupling also features a failsafe as well as vibration reduction which ensures a high level of resistance to wear and tear.

The Orpex couplings can operate within the same temperature range as the Habix and Hadeflex couplings, and once again are specifically designed to compensate for any axial or radial misalignment.

If you require any Desch parts such as the Habix, Hadeflex or Orpex couplings, then contact YB Components who are the UK’s leading Desch couplings suppliers.