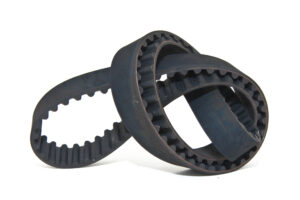 The high-powered ConveyXonic High Tension Poly-V belts manufactured by Hutchinson Belt Drive Systems are built to have a long life with little to no maintenance. Made with a reinforced stretchy elastic nylon, the Convey Xonic belts can greatly enhance the weight transporting capacity of motorised roller conveyors.

The Benefits of Convey Xonic Belts

ConveyXonic Poly-V belts can move heavier weights at much higher speeds across much longer areas. They are also capable of stopping quickly and safely. With such extreme weights capable of being moved, it might be necessary to increase the driving force of the belts, which is easily achieved by adding more ribs.

The Poly-V belts are designed to ensure a smooth movement even at high speeds such as four metres per second. They can maintain these speeds and smoothness over a long operational field. The belts are so powerful they can enhance one motorised roller to effectively reproduce the torque power of twenty.

The reinforced nylon in ConveyXonic belts is stretchy thanks to being slightly elastic. This elasticity enables them to stretch between 2% and 7% longer so that the belts can maintain their performance over the typical centre distance tolerance range of the standard conveyor frame model.

Convey Xonic Poly-V belts can be used as direct replacements for chains on the likes of pallet conveyors. Instead of using sprockets, the hubs of the belts are steel end caps. Usually it is better to replace a chain with a Poly-V ConveyXonic belt as they will have a much longer lifespan while massively reducing all the noise, grease and dirt that are inevitable side effects of using metal chains.

The belts also remain exceptional even when being worked in harsh or dirty environments. They are actually specifically designed to continue operating perfectly in dusty surroundings. This is achieved by the tips of the belt’s ribs being truncated so that they do not quite reach the bottom of the pulley’s grooves. This creates a space where the dust can gather without affecting the operational functionality of the application. The dust is directed into the space by the tension of the belt’s nylon reinforcements and will usually exit the pulley system whenever it rotates.

The ConveyXonic belts are often referred to by slightly different names, sometimes with a space between the ‘Convey’ and the ‘Xonic’, though usually (and correctly) without a space. Some ConveyXonic suppliers mysteriously advertise the product without the X, so the product reads as ConveyOnic or Convey Onic.

Another name variation the ConveyXonix belts may be known by include the Poly-V part being spelled as PolyVee. Plus without its brand name it is likely just described as either a multi-rib belt, V-ribbed belt or a poly-ribbed belt. But whatever name the belts are filed under, they remain one of the most powerful and reliable power transmission belts on the market.

If you require any ConveyXonic or Poly-V multi-ribbed belts – then contact YB Components who are the UK’s leading ConveyXonic suppliers.