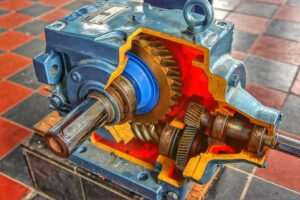 Kumera Drives have been in business for over 75 years manufacturing multiple clutches and gearboxes. This blog has previously featured articles highlighting several of their products such as the One Stage Helical or Bevel gearboxes, or the Vertical Shaft gearboxes, so here we will focus on highlighting some of their other excellent products.

For Kumera gearboxes designed especially for non-continuous operation, business owners and managers need look no further than the Covera Series. The Kumera clutches and gearboxes in this range feature a concave and convex tooth profile which the manufacturers included so it can handle harder impacts and heavier loads than other worm gear designs.

The extra strength of the Covera Series tooth profiles comes from the surface pressure being spread out into a larger area which has the effect of causing a surface pressure drop which reduces the power of hard impacts and pressure of heavy loads.

These Kumera gearboxes are for use with particularly rough applications such as mixers and feeders, bark removal processes and anode jacking systems. Industries they are most commonly used in include wood handling, mining and mineral processing, aluminium manufacturing and the waste water and chemical industry.

The Kumera Active Drive Girth Gear is designed to ensure optimal load distribution across the gear’s teeth profiles for many years operation without suffering misalignment. They use a compact solution that enables full load capacity, while the girth ring provides maximum usability as well as serviceability with the usual minimum space requirements you would expect from a compact gear drive.

The Kumera girth gear drive constantly modifies the alignment of the drive unit in order to optimize the tooth contacts so that it can achieve gear load ratings that are superior to other more conventional gear drives.

The Norgear anode jacking system manufactured by Kumera Clutches and Gearboxes are custom-made for each pot technology. Despite the unique designs, Kumera’s Norgear jacks always operate at high efficiency due to the concave-convex worm tooth profiles they feature.

Anode Jacking Systems, sometimes referred to as ‘beam risers’, are a crucial element of the construction of large-scale pre-baked pot technologies. Their purpose revolves primarily around lifting the busbar during the process of aluminium electrolysis. The anode block is pre-baked and affixed to the busbar with special clamps, with the busbar itself fixed and suspended to the anode jacking mechanism. The anode carbon block then drops down as the carbon anodes are consumed, with its lowest position indicating that the anode busbar must now be lifted to maintain the correct distance betwixt anode and cathode. It is this process which enables the electrolytic anode to operate under optimal conditions.

The Kumera gearboxes and clutches, as well as other electrical components in the Norgear anode jacking system, must all be extremely heat resistant so they can handle very high temperatures and even radiation from the severe pot environment.

If you require any Kumera clutches and gearboxes or any of the other Kumera components available, then contact YB Components who are the UK’s leading Kumera Drives suppliers who can ship their parts all over the world.