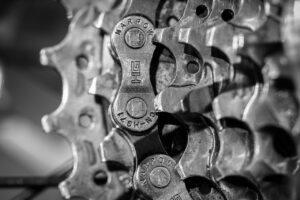 There was good news for the German industrial sector recently when the country’s Chambers of Industry and Commerce (DIHK) updated its economic growth forecast for 2018 from its originally projected growth of 2.2% to 2.7%. Already Europe’s biggest economy, German industry is now looking forward to an even brighter future with this year already seeing a significant boost in the morale of workers across the country.

A survey of 26,000 business managers conducted by the DIHK discovered that morale related to current working conditions has climbed to a record-high, with 54% of companies reporting good conditions. Only 6% reported bad conditions, with the remaining 40% reporting that conditions were satisfactory.

In light of this boost to the German economy and the continuing success of German industry, here is a quick guide to just a few of the excellent German industrial parts manufacturers supplied across the world by YB Components.

Danfoss Bauer are renowned  for manufacturing some of the best gearboxes and geared motors on the market. The company has been going in one form or another for over ninety years now, and with a little help from Danfoss Bauer distributors they have grown into a global brand and often the preferred choice of many industrial businesses that require high-quality and reliable gearboxes and geared motors.

Bauer’s geared motor units are also guaranteed to last a long time with only the minimum of maintenance required. They have such long lives because of the special ball and roller bearings Bauer uses as well as the hardened ground gears which reinforce the gearboxes and geared motor units they produce.

Germany-based Desch were first established back in 1906 and have since become another renowned international manufacturer of various drive technologies, with Desch couplings particularly popular among the Desch products range. As they focus solely on the design and manufacture of clutches and couplings rather than spreading themselves too thin, Desch products are always of an especially high standard. Interestingly, the company is still family-owned with the owners now consisting of the Desch family’s fourth generation.

One of the most popular Desch products is the Planox Clutch, which has been designed to be extremely flexible so it can more easily handle the impacts and vibrations caused by a machine’s operation. Another is the Conax Clutch, which is specifically designed to protect the drive mechanism from overload.

If you require industrial components such as clutches and couplings or gearboxes and geared motors, then contact YB Components who are the UK’s leading couplings distributors and gearboxes suppliers who can ship these parts all over the world.