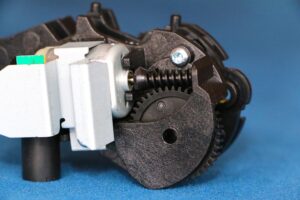 Originally founded as the Japanese Aircraft Electric Company nearly three quarters of a century ago, CKD Pneumatic Components has long been established as one of the world’s leading pioneers in automation technology, as well as premium manufacturers of electric actuators. Here we take a quick look at some of the CKD actuator models they have produced, both with a motor integrated into the design and without.

The third type of motor integrated CKA actuators are the ESSED and ELCR models, which are much thicker and wider than the ERL2 and ESD2 designs. These CKD actuators feature an integrated controller to save space, while the intuitive settings make operating this actuator easier than ever.

There are five designs in the motorless class of CKD actuators. First, the Electric Shuttle Mover (ESM) which features a double axial motion which is achieved with just one motor for space saving purposes, though the design is specifically made to be compatible with all types of CKD motors. The maximum stroke of this model is 20m, while the multi-point positioning and gentle start/stop mechanism make it ideal for many different applications.

The ETS Electric Actuator can also be equipped with motors if so desired. The repeatability factor of this model makes it very attractive for certain operational applications, with the horizontal load capacity ranging up to 150kg.

The ETV Electric Actuator is belt driven and produces particularly long strokes at high speed. Again, a variety of motors can be used in conjunction with this model if needed. This ETV version is also notable for its abundant mounting specifications. It is another design that is easy to maintain, with a 85kg maximum horizontal load capacity.

Finally, both the ECS and ECV Electric Actuators have similar specs, although at 150kg, the ECS has a much higher horizontal load capacity than the ECV which is maxed out at 85kg. They are both notable for having low dust specifications and being compatible with a variety of screw leads and motor types. The designs again allow for easy maintenance, while both the ECS and ECV have a lot of versatility due to the multiple sensor mount options.

If you require any CKD actuators or CKD index motors, then contact YB Components who are the UK’s leading industrial machine part suppliers who can ship parts such as CKD motors all over the world.