Written by [google_authorship] on 9th June 2017 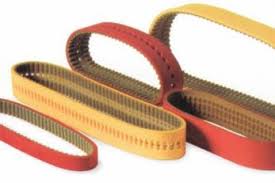 Carlisle Belts (made under the umbrella company Timken) have many different v-belt designs for a wide variety of applications. They are renowned for their heavy duty applications, with several of the Carlisle variable speed belts specifically designed to endure heavy loads and impact shocks. They are all purpose-built to produce the optimal performance for their given application, with particular attention paid to how well they resist the likes of heat, oil and chemicals.

Other qualities of the Carlisle v-belts are their ability to dissipate static, which is an issue many inferior v-belt designs suffer from. Such problems are not an issue for these Carlisle variable speed belts though as they are designed and built to strict specifications and rigorously tested under harsh operating conditions to ensure they deliver on their promise. Below are descriptions of just a few of the Carlisle components available via YB Components.

This Carlisle variable speed belt is specially built for use with outdoor power equipment. The Aramax Xtra Duty V-Belt is designed with a smooth clutching cover and strong aramid tensile cord that features a reduced stretch, increased strength and extended durability. The construction of this belt is purpose-built for high performance such as aggressive applications with heavy shock loads, delivering more horsepower with the reduced stretch allowing for a longer operational life.

These Carlisle variable speed belts are also particularly resistant to heat and oil thanks to the superior clutching fabric, increased thread count and a special rubber compound which helps provide additional resistance to the rollover problem many heavy duty v-belts suffer.

This excellent heavy duty variable speed belt model is made with Ethylene Propylene Diene Monomer (EPDM), which is a special synthetic rubber with properties that make it especially useful for heavy duty operations. Thanks to the special compound, the Gold Ribbon Cog-Belt is extremely durable, heat resistant and static conductive. This design is also especially resistant to the hardening and glazing problems that beset certain v-belt designs.

Another interesting feature of these Gold Ribbon Cog-Belts is the broad temperature range they can operate under. They can operate at temperatures as low as -50°F (-45°C) and as high as 250°F (121°C). Whatever the temperature is, they are known to maintain a smooth running with excellent flexibility to help maximise the performance on what would be a relatively small diameter pulley according to their designed purpose.

Similar to the previous Carlisle variable speed belt, the Metric Power-Wedge variety is designed to be tough and durable, with just as wide an operational temperature range as described above. As well as the built-in heat resistance, these belts are static conductive while a new cog profile designed by the Carlisle/Timken engineers significantly reduces the bending stress during operation. This Carlisle v-belt’s side walls are also designed to reduce vibration which in turn helps extend the life of the part.

If you are interested in any Carlisle variable speed belts such as those mentioned above or others featured in their product catalogue, then contact YB Components who are the UK’s leading suppliers of Carlisle components, available now to ship all over Europe.