Written by [google_authorship] on 4th November 2016 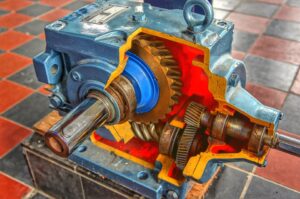 Certain components of industrial machinery will always need a repair service every now and then, no matter how well you look after them. Gearboxes can be especially prone to problems which can only be solved with the help of a reliable repair service, mostly due to the fact that transmission systems are usually some of the most complicated mechanisms used in either industrial machinery or vehicles such as cars and trucks.

Part of the problem is that they rely so much on several small and large parts working in unison together, so the potential for one element to throw everything else out of kilter is huge. Thanks to these complex mechanisms, there is usually a high probability that machines using gearboxes will develop glitches in their transmission systems and thus require a gearbox repair service at some point or another.

Usually a leakage of the transmission fluid in older gearboxes is caused by a broken seal, though it can happen even to new gearboxes if the parts haven’t been installed correctly. Other causes might be if the pan gasket has a defect or the filler tube has become loose. Whatever the reason for the leak, it’s important to identify it quickly and make use of a gearbox repair service to ensure the fluid doesn’t get too low during operation, as that would increase the friction and multiply the wear and tear far beyond what it should be. Ignoring such a problem will eventually result in complete breakdown.

Another common problem that plagues gearboxes is the issue of gear slipping. Often, a gear slipping issue can be caused by a problem with the transmission fluid, either too much or too little, or it is possible that the transmission bands and gears are damaged, resulting in the slip. It is probably even more important to get the problem of slipping gears fixed with a gearbox repair service as soon as possible as it can actually be quite dangerous, especially so in road vehicles.

Obviously the transmission fluid levels should be checked regularly, but also look out for other symptoms of slipping gears such as false neutrals or delayed responses with regard to the pressing of the accelerator pedal. Also pay attention to any increase in RPM, as well as any sudden down-shifting that occurs without direct instruction from the driver (such as the vehicle shifting down into a lower gear without the vehicle operator engaging the gearbox).

If you want to send a gearbox through for a free inspection and report, or you already know that you want to take advantage of the gearbox repair services on offer, then contact YB Components whose repairs are carried out under strict control and carry a full twelve month warranty.