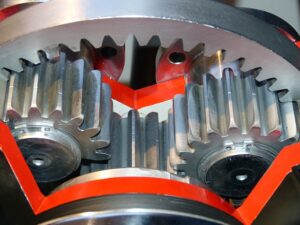 Recently, the Bauer Gear Motor Company helped an unnamed leading global aerospace and defence Original Equipment Manufacturer (OEM) create a unique gear drive solution to be used with a large inspection unit which was especially tricky due to the geared-motor unit being located in a clean room chamber. The Bauer gear-motors involved in the operation also had a rather large diameter of just less than three and a half metres. It was quite the test for the Bauer engineers, but they passed with flying colours.

The geared-motor units are being utilised in the hybrid propulsion drives installed on several warships belonging to the navy of the United States of America. The Bauer gear-motors rotate the nearly three and a half metre gear at just five revolutions per hour. Meanwhile, a laser scans the teeth of the gear seeking out any unnatural abrasions or imperfections that might cause problems for the operational functionality of the machinery.

The engineers from Bauer worked alongside those of the OEM in order to configure this custom gear drive solution, which Bauer announced to have consisted of various standard catalogue components in order to achieve a 15,000:1 reduction ratio, which was the highly demanding requirement for the inspection unit. The geared-motor units involved consist of a BG10 drive and a primary BK60Z drive.

Interestingly, this particular Bauer geared-motor unit solution utilises only six stages to achieve the extreme reduction ratio, with Bauer themselves noting that their competitors in the field would usually require at least seven stages. The gear-motors are then supplemented with built-in Variable Frequency Drives, all of which include programmable remote control panel access. This feature allows operators of the machinery to program the inverter via the remote control panel access.

Bauer Gear Motors Are a Driving Force in the Market

The globally recognised Bauer have been producing gear motors for over 85 years now and are widely considered to be the driving force in drive technology. For the past five years, the Bauer Gear Motor Company has been part of Altra Industrial Motion, which is one of the world’s leading manufacturers of electro-mechanical components. Altra Industrial Motion has a presence in over 70 countries around the world, which has obviously helped Bauer to improve its interactivity with the global market. Bauer have, in fact, opened a new assembly plant in China as recently as 2012, as well as continuing to expand their geared-motor unit manufacturing capacity around Europe in places such as Germany and Slovakia.

Their German base, situated in Esslingen in the Stuttgart region, is actually their headquarters and has recently been the beneficiary of a €15 million investment. A large part of that investment is going towards the improvement of their production capability for the likes of their gear motors and geared motor units, with the intention of making Bauer one of the most versatile gear motor manufacturers in the world.

If you are interested in any of Bauer’s gear motor products, then contact YB Components who can ship these parts all over the world.