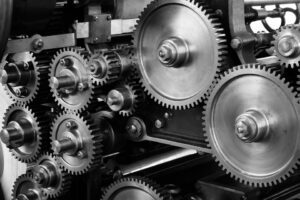 Most problems with large machinery are solved via preventative measures before they become actual problems, so it’s important to know how to maintain such equipment correctly so that major issues are not something our businesses have to deal with on a regular basis. The following list contains four vital methods for keeping large machinery in good working order.

Wear and tear is inevitable in many cases so a regular maintenance schedule is crucial to ensuring you remain on top of any issues before they cause even bigger problems. Regularly inspecting the likes of your Spaggiari gearbox units for example can reveal a problem like rust before it badly damages the whole machine. When regular maintenance checks are a priority, problems rarely get the chance to become major headaches.

It’s also a good idea to have an idea of the expected lifespan of certain parts so you know well in advance when to expect a breakdown. If there’s just one part of some Spaggiari gearbox units that are due for replacement, then replacing it before it breaks down entirely and potentially causes further damage to other parts can save a business a great deal of time and money. This is also important because of the fact that many governments around the world have strict laws regarding plant and equipment maintenance.

Keeping a record of machine usage means monitoring when and where a machine has been used and for how long. However, just as importantly, a record of who the machine was operated by must also be stringently kept. Incompetent handling of a machine is a major contributory factor to wear and tear and eventual breakdown, resulting in the machine requiring downtime due to repairs or even replacement. Knowing who was operating the Sirem pumps (for example) during periods where leaks or other issues arose will allow the overseer to identify a key problem and help prevent future issues.

For the tech-savvy businesses out there, you can look into acquiring a GPS tracking system which records the machinery’s movement and various operational features in a digital record which can then be examined for any potential problems.

Many machine components such as the moving parts inside engines and any machinery utilising variable speed belts require frequent lubrication to ensure they are kept operating at maximum capacity. You will also need to closely monitor the likes of bearings and couplings as they will need lubrication at various points, if not as often.

Cleaning the machine components will help elongate the lifespan of the machine, while the lubrication will help avoid contamination. Ensure any water and other contaminants are cleaned away so they don’t dilute the lubricant, which can encourage problems such as corrosion. Variable speed belts whose components are kept clean and lubricated will operate at a much more efficient capacity than variable speed belts that are neglected and allowed to become contaminated.

Always seek to store large machinery under cover, preferably in a shelter away from the elements. Any machines such as motors and turbines should be turned frequently to prevent certain ailments setting in. They should be regularly checked for corrosion and rust as well as condensation, while also being kept oiled and lubricated even when not in use.

As much as we try, wear and tear is inevitable, so when you do need to replace items such as variable speed belts, Spaggiari gearbox units or Sirem pumps, then contact YB Components who can ship these parts all over the world.