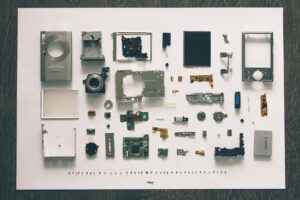 Ballscrews are an essential component of precision machinery as they are a linear actuator that is able to turn rotational motion into linear motion. They achieve this via ball bearings which operate like a precision screw, utilising the helical pathway of the threaded shaft. They are especially useful for precision machinery as the screwing action produces little internal friction and thus doesn’t interfere with the machine’s precise operations.

While distinctly different from a standard screw and nut, the ballscrew (sometimes written as ‘ball screw’) has essentially similar parts, with the ball bearing assembly operating as the nut while the threaded shaft operates as the screw itself. A Ballscrews‘ manufacture may see them built quite bulky, as the housing requires an in-built mechanism to re-circulate the ball bearings so the device can continue screwing once the finite helical pathway has been completed.

The Benefits of Ballscrews

All ballscrews suppliers will lead with their product’s ability to handle high-thrust loads with an absolute minimum of internal friction. This in turn leads to the ballscrew being able to yield a very high mechanical efficiency. It is the primary direct benefit of utilising ballscrews, but they have more than that going for them.

The other significant benefit of ballscrews is their longevity, with the lack of sliding or rubbing friction allowing the part to maintain a long lifespan. This helps greatly towards reducing the amount of necessary repairs of any machine utilising ballscrews.

Ballscrews are often used in military and commercial aircraft as well as in missile hardware to adjust control surfaces. A road vehicle’s power-steering is another beneficiary of the precision of ballscrews, as they convert the electric motor’s rotary motion into axial motion of the steering rack, which is what makes power-steering so much easier.

Ballscrews distributors also supply their wares for use with machine tools along with many different kinds of precision assembly equipment. Semiconductor manufacturing utilises high-precision ballscrews for their steppers (devices used in the manufacture of integrated circuits).

While the process of ballscrew manufacture makes them naturally long-lasting and hard-wearing, care is still needed to ensure you maximise their efficiency. The most important aspect of ballscrew maintenance is ensuring that the threaded shaft does not become contaminated with dirt or any other kind of abrasive particles. One method of care is to use pressured air to clean through the threaded pathways, while additional preservation can be achieved by using rubber (or other suitable material) bellows which can either partially or completely enclose the working surfaces.

YB Components has many years experience sourcing and supplying this exact kind of specialist part for a wide variety of applications. As one of the premier ballscrew distributors, the products sourced and supplied will be of the highest quality, ensuring your precision machinery can operate at its absolute maximum capability.

Get in touch with YB Components for all your industrial components solutions.